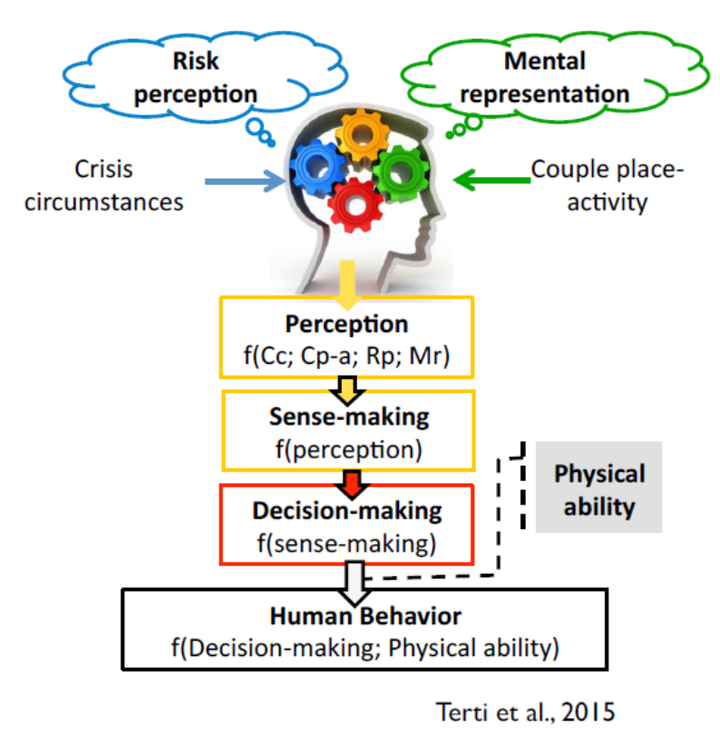 Flash floods have been recognized as one of the most damaging, costly and frequently occurring natural disasters around the world. They cause enormous economic and human losses. Recent studies increasingly show that such events may become more frequent and severe in the future, because of climate change, land-use change, and rapid urban development. This leads to growing concerns about exposure and vulnerability of societies to flash floods. Social and spatial disorganization are caused by flash floods and specific human behaviours in the affected areas. The high degree of individual variability in behaviour during a flash flood event makes it very difficult to make a distinction between responses stemming from factors common to a whole population (e.g. nature of the disaster, social structure of the community) and highly individualized factors (e.g. previous disaster experience, social situation at the time of the disaster). Human behaviours have not been sufficiently taken into account in studying the flash flood impacts. It is essential to include both social and physical vulnerability in flood risk assessment. Human behaviours related to risk may increase the social, economic and political impact of flash flood disasters beyond their direct consequences. Social aspects of flooding have been generally ignored in flood risk management. Also, there are still weaknesses in understanding flood risk perceptions and protective behaviour. In fast-moving events like flash-floods, the amount of time available to detect the threat and respond to it is so limited that protective actions often consist in dealing with contingent situations triggered by the irruption of dangerous circumstances in the middle of daily life activities and routines. Understanding how people actually detect potentially dangerous circumstances and manage to timely adapt their routine to cope with the hazard evolution remains a challenge. Based on insights from post-flood interviews, online surveys were used to quantitatively document behavioural responses associated with three catastrophic flash flood events that happened in southern France in 2014 and 2015. The coupled analysis of responses to these surveys with hydro-meteorological parameters was carried out for a better understanding of the link between the event magnitude and self-protective behaviours in the context of short-fuse weather events as flash floods. Knowledge gained from such an integrated approach is necessary for drawing lessons for the development of coupled human-natural system modelling and the prediction of the social impacts of flash flood events.